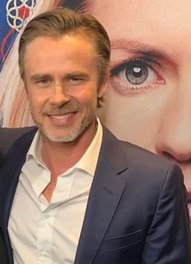 Sam Trammell is an American-born actor who gained fame for his role on HBO’s AFI award-winning fantasy drama series True Blood which aired in 2008 playing the role of Sam Merlotte. After playing the role of Richard Miller in Ah, Wilderness!, Trammell was nominated for the Tony Award for Best Featured Actor in a Play.

Trammel has also starred opposite Chrissy Metz in the 2019 movie Breakthrough. He appeared on Homeland (2011) as Vice-President Benjamin Hayes. In 2014, Trammell co-starred in The Fault in Our Stars (2014), based on the best-selling novel, with Shailene Woodley and Laura Dern.

He co-wrote, co-produced, and starred in the indie film All Mistakes Buried (2015). His additional film credits include I Am Wrath (2016) with John Travolta, Imperium (2016) opposite Toni Collette, 3 Generations (2015), with Naomi Watts, Susan Sarandon, and Elle Fanning.

He completed production on the indie films Hospitality (2018) opposite Emmanuelle Chriqui, and La Gran Promesa (2017) by Mexican filmmaker Jorge Ramírez Suárez. He was a series regular on Maximum Bob (1998), Trinity (1998), and Going to California (2001).

A theater veteran, Trammell earned a Tony nomination and the Clarence Derwent Award and Theater World Awards for his role in “Ah, Wilderness!” at Lincoln Center. His extensive on and off-Broadway, as well as regional credits, include “Kit Marlowe” at The Public Theater, “Dealer’s Choice” at the Manhattan Theater Club, “Ancestral Voices” at Lincoln Center, “My Night With Reg” with The New Group, “Rope” with The Drama Dept, “If Memory Serves” at the Promenade Theater, and “Our Town” at Williamstown.

A native of Louisiana and West Virginia, Trammell graduated from Brown University and the Sorbonne with a Bachelor of Arts in Semiotics. He currently resides in Los Angeles with his family. He is an advocate for clean oceans and beaches and works with the non-profit organization Oceana.

The American born actor, Trammell, was born on January 29, 1969, in New Orleans, Louisiana, United States. As of 2020, Sam who is famously known for his character on True Blood, is 51 years old. He celebrates his birthday on 29th January every year.

The nominated Tony Award for Best Featured Actor, Sam Trammell, stands at a height of 1.78 meters tall which is equivalent to 5 feet 8 inches tall. Sam has an average-sized body and it is hard to determine his actual weight. He is yet to reveal his actual weight to his fans. This information will be updated as soon as it has been provided.

He started his early education in Charleston in West Virginia. Right from the outset, Trammell showed signs of intelligence and creativity. He grew up dreaming that one day he would come to be an astonishing astrophysicist. After completing his high school education, he joined Brown University in Rhode Island where he majored in Philosophy. In the course of his studies, he participated in artistry as well as joining the University’s band. This is what led him to act.

Sam’s friends persuaded him to fill a position for a play that was written by one of the students at Brown University. He practiced the part where he played and received his gateway to Broadway. In short, that’s how his career started. He quickly forgot about his previous dreams, where he went to New York to pursue acting. It was here that he took several classes and he started acting with the help of an agent.

Sam is the son of Willis, his father, and Betsy, his mother. He is also the brother of Paul and Elizabeth.

Trammell was born in New Orleans, Louisiana but was raised in Charleston, West Virginia. During his theatrical performances in 2003, Sam met the love of his life fellow actress, Missy Yager while performing theater in New York City. The couple welcomed twin boys in 2011. They named their children Winston Trammell and Gus Trammell

Trammell has worked in theater, Broadway, Off-Broadway, film, and television. He is an accomplished New York stage actor whose credits include a Tony-nominated performance in Ah, Wilderness! at Lincoln Center. Off-Broadway, he starred in Dealer’s Choice, My Night with Reg, If Memory Serves, and Ancestral Voices, as well as in Kit Marlowe at the Joseph Papp Public Theater, where he received outstanding reviews.

Trammell’s big break came when he landed the role of Sam Merlotte on the HBO series True Blood. In 2013, Trammell played Darrell Mackey in the drama film White Rabbit. Trammell played Hazel’s (Shailene Woodley) father, Michael Lancaster, in the 2014 film The Fault in Our Stars, based on the novel of the same name by John Green.

In 2019, Trammell starred in the Netflix horror-drama series, The Order.

Sookie Stackhouse works as a barmaid in Louisiana and has the ability to read people’s minds. Her life changes when the vampires in her town reveal their existence to the world.

Sam Trammell This Is Us

Kevin, Kate, and Randall, three siblings, go through unique personal struggles at different intervals of life as they try to find happiness and get over a tragedy in their past.

Trammell has not revealed his official Facebook page. This information will be updated as soon as it has been provided.