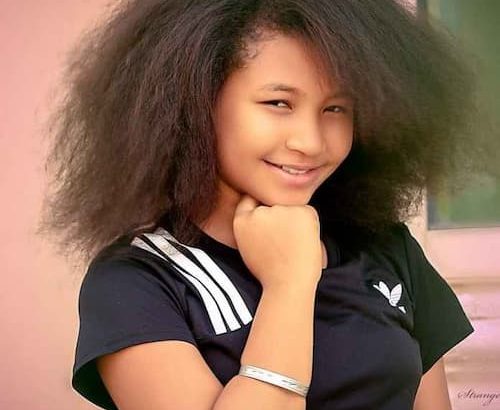 Pearl Shim born (Pearl Shim Oghenetejiri Mugala Chioma)  is a Nigerian-born actress. Shim is well known as little Daniella of soulmate studios. She is a fast-rising actress who has been featured in many movies. She has made a lot of impact in the industry. Pearl joined Nollywood in 2017 at the age of 9.

She was born to mother Franca Mugala but she died in 2020. Her father is from South Korea but pearl said in an interview that she never met her father. Shim is the only child of her family and she has no other siblings.

Shim is not in any relationship. She is young and she wants to concentrate on her career and education. The information about her being in a relationship will be updated soon.

Shim is doing her secondary education in Warri, Delta State. Her acting career started in 2017 at the age of 9 and she has made a significant impact in the movie industry. The creative and talented actress has been featured in movies like Hosting, Small Girl with big God, All I want for Christmas, Lent, My Kids and I, Little Daniella. She has acted alongside top Nollywood stars like Christian Paul, Ebu Oguike’s family, and others.

She said in an interview that her role model is Regina Daniels because of her brilliant way of acting and she also mentioned that her male role model is Ik Ogbonna.

She is one of the highest-paid Nollywood teenage actresses and she has earned a lot through her career as an actress. Pearl has an estimated net worth of $50,000 dollars.