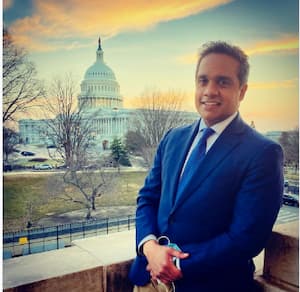 Manu Raju is an American award winning journalist who currently serves as the Senior Congressional Correspondent at the news Network CNN.

He covers the United States Congress as well as campaign politics. Previously, he reported for Politico as a senior Capitol Hill correspondent as well as for other D.C. news outlets.

Manu stands at an average height and is of moderate weight. However, he appears to be quite tall in his photos relative to his surroundings. His exact weight and height are however not currently available. We will update this information as soon as it is available.

Manu was born to parents Dr. Tonsen N. K. Raju and Vidya Raju who migrated from Karnataka, India, in the 1970s. They both later worked at the National Institute of Health His father is a neonatologist and formally a professor of pediatrics at the University of Illinois at Chicago. Gopalakrishna Adiga, Raju’s grandfather, was a poet from India who wrote in Kannada.

His brother, Sharat Raju is a film and TV director.

Raju is happily married to his loving and supportive wife, Archana Mehta. The two are loving parents of twins, a boy, and a girl, born in 2015.

Manu attended Hinsdale South High School, graduating in 1998. He later attended the University of Wisconsin-Madison, graduating in 2002 with a degree in business administration. During college, he worked as the sports editor for The Badger Herald student newspaper.

Raju started working on the assignment desk at WMTV in Madison, Wisconsin, before moving to Washington, in 2002. There, Raju took a job with Inside Washington Publishers, covering environmental policy. Later, he worked for Congressional Quarterly, The Hill, and Politico, where he reported for seven years before joining CNN in September 2015.

Prior to joining CNN, he was a regular guest on many networks and programs, including NBC’s Meet the Press and CBS’ Face the Nation. When Raju was employed by CNN, Erik Wemple of The Washington Post called the move a “towering get” for the network.

Manu has developed a reputation for finding out what politicians are discussing behind the scenes and broke major stories during the 2013 government shutdown and during the Senate Minority Leader MitchConnel’s opponent appeared to be getting an illegal campaign bus from her father, who was later sentenced to prison for campaign finance violations.

In 2016 for CNN, he was the network’s lead correspondent covering Sen. Marco Rubio’s presidential campaign, covered extensively the GOP establishment’s struggle with Donald Trump, and broke big news in high-profile Senate races, including in New Hampshire.

Raju was featured on the cover of India Abroad newspaper, which dubbed him the “King of the Hill” for his reporting key decision-makers in the United States and on Capitol Hill in 2017. “Manu excels at that inside-the-room reporting,” a former politico editor was quoted as saying. The article called Manu ” one of the few Indian American journalists in a prominent position in the mainstream media.”

In January 2017, Raj broke a major story when he detailed a stock trade that raised ethical and legal questions for Tom Price, President Donald Trump’s Health and Human Services nominee. The Trump administration requested a retraction, but fact-checkers found his story to be accurate, and Wemple called his reporting on the story “a model of careful and measured journalism.”

Moreover, Manu has developed a reputation for asking tough and pointed questions to leaders of congress. Speaker Nancy Pelosi grew testy during a one-on-one interview that focused largely on the issue of impeaching then-President Donald Trump in 2019.

On January 6, 2021, Manu was broadcasting inside U.S. Capitol during the attack on the building, reporting n real-time events as they were unfolding nearby him. In 2021, CNN announced that He was promoted as the network’s Chief Congressional Correspondent.

Moreover, Manu has been able to attain a number of awards. In 2012, he was part of a team of four reporters that won the White House Correspondent Association’s prestigious Merriman Smith Memorial Award for presidential reporting under deadline pressure for their coverage of the 2011 debt ceiling crisis.

In 2015, Washington Life magazine named him one of the city’s “movers and shakers” under the age of 40. That year, Raju was inducted into the Hall of Fame for his high school, Hinsdale South.

Moreover, He was honored with the 2016 Joan Shorenstein Barone Award for excellence in Washington-based reporting of Congressional and political affairs for his coverage and congress and campaign politics in 2017. This award was given to him at the 2017 Radio and TV Correspondents Association dinner in Washington, where the host, Bobby Bones credited his “tenacity” and “relentless” coverage. The judges awarded Manu the prize for his piece detailing how the New Hampshire Senate Candidates from both parties struggle to embrace their respective presidential nominees, providing “forward-looking  and sharp coverage of the dynamics affecting congressional races around the country” and “skillfully questioning candidates by pushing them to go beyond talking points.”

Manu Raju Net Worth and Salary

Manu receives an average annual salary of $100,000. Moreover, Manu has a remarkable Net Worth of $3 million as of 2020. Raju’s primary source of income being his career as a journalist.