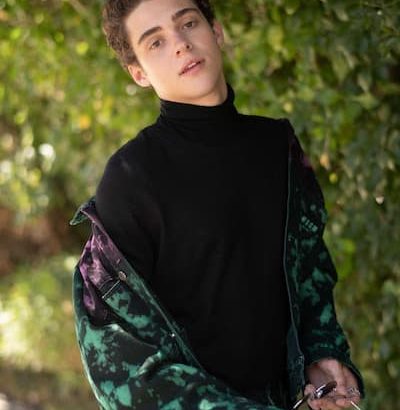 Joshua Bassett born (Joshua T. Bassett) is an American actor and Singer. He is well known for the role he played as Ricky Bowen in High School Musical: The Musical: The Series.

He was born on 22 December 2000 in Oceanside, California, United States. He is 21 years old as of 2021. He celebrates his birthday every 22nd of December every year.

He stands at a height of 1.80 meters tall and weighs 75 kilograms. He has dark brown hair and hazel eyes. He has a slim body but his body measurements are not available.

Bassett was born and raised in Oceanside, California. He is the son of Taylor and Laura, and he has five sisters. Alison Bassett , Claire Bassett, Ashley Bassett, Winter Bassett , and Hannah Bassett.

Joshua was homeschooled and is a high school graduate. He has also attended the  Palomar College in San Marcos, California.

At the age of eight, Joshua was introduced to musical theater. Later, he starred as Ricky in “High School Musical: The Musical: The Series”. After that, he has starred in more than 30 musical productions. What’s more, he also sings and plays piano, guitar, and drums.

He made his very initial substantial role on the TV series “Stuck in the Middle” in the year 2018 in the role of Aidan Peters. He was then cast as Ricky Bowen at the age of seventeen in “High School Musical: The Musical: The Series”. He then signed with talent and entertainment company United Talent Agency at the starting of 2020.

He will soon release his debut EP in the starting year of 2021 with its lead single “Lie Lie Lie” which was released on 14th January 2021. Besides this, he has also acted in films and TV shows which include Lethal Weapon, Game Shakers, Dirty John, Grey’s Anatomy, Nickelodeon’s Unfiltered, and more.

Bassett is an American actor and singer who has earned a lot through his career. He has not shared any information about his net worth.