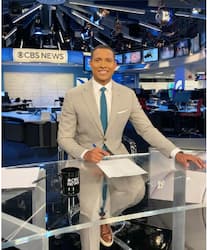 Errol Barnett is a British American journalist working at CBS News. He reports for all CBS News broadcasts and platforms including “CBS This Morning”.

Before joining CBS News, Errol spent almost a decade at CNN with his most recent role as anchor of weekday editions of “CNN Newsroom” airing on CNN and CNN International. Before anchoring from CNN’s Atlanta headquarters, the network deployed Errol as a general assignment correspondent to Johannesburg, South Africa, and to Abu Dhabi, U.A.E as a midday anchor.

Barnett was born on April 3rd, 1983, in Milton Keynes, England, in the United Kindom. He is 38 years as of 2021 and celebrates his birthday on April 3rd every year.

Errol stands at a height of 5 feet 8 inches and is equivalent to 1.72 meters. Moreover, he is of moderate weight weighing 88 kg.

Barnett was born to parents Michael Christie and Pamela in Milton Keyes. His mother is an English woman originally from Liverpool. He has two siblings namely Danny and Natalie. Errol with his parents and his two siblings immigrated to the USA when he was 10 years old.

Unfortunately, his sister died and his father left the family. He was raised by his mother who became depressed due to the loss of her daughter.

Pamela, his mother later remarried Gary Barnett who was a US Air Force sergeant who served in the Gulf War, Additionally, he had a Jamaican grandfather named Goldstone Christie who was among the 500 Caribbean aircrews working with British Royal Air Force throughout WWII.

He is married to his beautiful and supportive wife Ariana named Tolbert. Errol met Ariana, his wife, in 2015 and started dating in June of the same year. After a period of more than two years of dating, Errol went done on his knee and proposed to Ariana on December 27, 2017, on the Island Beach Club.

They later exchanged vows on the 18th of May, 2019, in Hanover, Jamaica, before their close friends and family. The couple currently resides in Washington, D.C. However, there is no information on whether the two have kids or not. We will update this information as soon as it is available.

He attended Garden Lakes Elementary and Westview High School, in Avondale, Arizona, before Channel One News hired him in 2001 relocating to Los Angeles.

After his high school education, Errol joined the University of California where he graduated with a Bachelor of Arts degree in political science with a focus on international relations.

Barnett’s career began in 2001 channel One News, where, at age 18, he was the Los Angeles-based network’s youngest anchor and reporter. He covered the September 11, 2001, terrorist attacks, then-Senator Barack Obama’s first national speech, and the New England heroin epidemic.

Prior to joining CBS News, Errol spent almost a decade at CNN with his most recent role as anchor of weekday editions of “CNN Newsroom” airing on CNN and CNN International. Before anchoring from CNN’s Atlanta headquarters, the network deployed him as a general assignment correspondent to Johannesburg, South Africa, and to Abu Dhabi, U.A.E as a midday anchor.

Errol joined CBS News in 2016 as a Washington-based correspondent, covering the White House beat on weekends. He was with President Obama during his final overseas trip in office and questioned President Donald Trump several times at the White House and aboard Air Force One about threats against journalism and other major issues.

Moreover, He has secured several exclusive interviews, including with the creator of the controversial facial recognition app Clearview AI, with the mother of a 9-year-old Illinois boy charged with murdering five relatives, and with an Arizona woman attacked by a jaguar at a Phoenix Zoo.

He was the only journalist to fly through Hurricane Dorian when it stalled over the Bahamas as the most powerful storm to ever hit the country and reported extensively from Grand Bshsm island documenting its aftermath.

During his time at CBS News, his intrepid reporting has covered a wide variety of national and international events. In the thick of the 2020 presidential campaign, his interview with then-candidate Joe Biden was widely cited for the news it uncovered and at the end of 2020, Errol was the first to report extra doses of the Pfizer COVID vaccine were being discovered in vials by hospital staff across the country.

He has also served as a fill-in anchor on the “CBS Weekend News,” “CBS This Morning: Saturday” and on CBSN.

Errol Barnett Net Worth and Salary