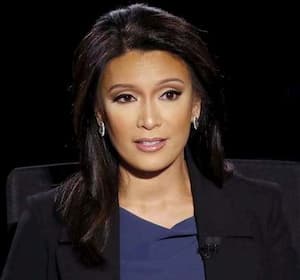 Elaine Quijano (born Elaine Cagas Quijano) is an American journalist who currently works for CBS News as a correspondent and anchor.

Prior to joining CBS News, she worked at CNN where she was once a White House correspondent for CNN. Quijano left CNN on December 23, 2009. She then joined CBS News in early 2010 as a general news reporter.

Quijano was born on January 21, 1974, in Chicago, Illinois, United States. She is 47 years old as of 2021 and celebrates her birthday on the 21st of January every year.

This renowned journalist stands at a height of 5 feet 6 inches equivalent to 1.68 meters. She also weighs 56 kg.

Her family currently resides in Batangas and Davao City in the Philippines, where her mother and father come from. However, She has not shared detailed information on her parents and siblings. This includes their names, ages, and professions. We are however keeping tabs and will update this information as soon as it is available.

Quijano prefers keeping her personal life away from the public and for this, not much is known abt her relationship status. However, we are keeping tabs and will update this information as soon as publicly available.

After finishing her primary and high school education, Quijano joined the University of Illinois at Urbana-Champaign. It was here where she graduated with a Bachelor’s degree in journalism in 1995.

In 1994, Eliane began her career as an intern at WCIA-TV in Chicago, Illinois. Elaine later became a reporter and anchor in WCIA-TV. She left the channel to become a general assignment reporter for WFTS-TV in Tampa, Florida in 1998.

In December 2000, Eliane was a correspondent for CNN Newsource, an affiliate of CNN. Eliane covered the September 11, 2001 attacks and traveled to Kuwait City shortly before the U.S. invasion of Iraq in 2003.

Moreover, she covered the 2003 Space Shuttle Columbia disaster and the Beltway sniper attacks. In 2004, She joined CNN/US as a Washington, D.C.- based general assignment correspondent. Elaine covered the Pentagon, the Supreme Court, the 2004 re-election campaign of President George W. Bush, and vice-presidential candidate John Edwards.

She was named a White House correspondent for CNN in 2006. In that role, she covered major stories of the George W. Bush administration, including the War on Terror, the unsuccessful bid for comprehensive immigration reform, and the 2008 financial crisis. She later left CNN on December 23, 2009, and joined CBS News in early 2010 as a general assignment reporter.

At CBS, she covered Hurricane Sandy in 2012, the Boston Marathon bombing in 2013, the 2012 Sandy Hook Elementary School massacre, and the 2014 World Cup. She is the anchor for CBSN, the digital streaming network for CBS. Moreover, she anchors the Sunday edition of CBS Weekend News. Quijano’s work has appeared in CBS This Morning and The CBS Evening News.

In 2009, she was the convocation speaker at the UIUC College of Media, her alma mater. The Commission on Presidental Debates was named by the Commission for the Vice-presidential debate on Tuesday, October 4, 2016, at Longwood University in Farmville, Virginia. This made her the first Asian American to moderate a U.S. debate for national elected office in the general election, and the youngest journalist to moderate a debate since 1988. Moreover, this was the first time a digital network had been selected to moderate a national debate.

Elaine Quijano Net Worth and Salary

This renowned journalist receives an annual ranging between $70,000 to $176,000. Moreover, she has been able to accumulate a net worth of around $1.3 million.