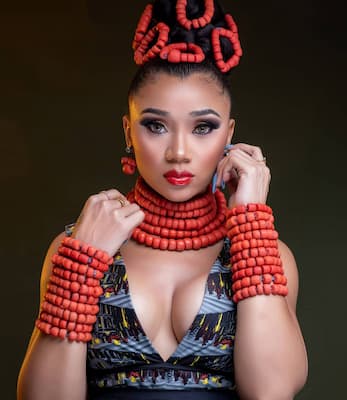 Christiana Martin is an award-winning filmmaker, actor, scriptwriter, model, and video editor. She is a leading Nigerian-German actress in the Nollywood industry with several blockbuster movies under her belt. The mixed-race actress is also a model and the mother of two adorable children. She was born to Nigerian and German parents.

Martin was born on October 26 in Warri, Delta State part of Nigeria. She celebrates her birthday every 26 of October every year. She has not shared when she was born. Her age and the year she was born are not available.

She stands at an average height and in moderate height. She appears to be tall and of good weight. She has black hair and brown eyes. She has also not shared her other body measurements.

Christiana was born in Warri, Delta state. She is half German, half Nigerian. She is currently based in Nigeria. She has not shared much information about her parents and siblings. Martins has managed to keep her family identity away from the limelight.

She obtained a degree in HI-DEF Film-making, Acting for film, and video editing at the New York film academy. She also studied at the Abu Dhabi campus.

Christiana started acting professionally in 2014 and in 2015 she studied Hi-Def Filmmaking and New York Film Academy, where she directed three short films.

Following the completion of her professional course, she went ahead to produce her first featured film titled SCORNED, in which she played the role of a rape victim.