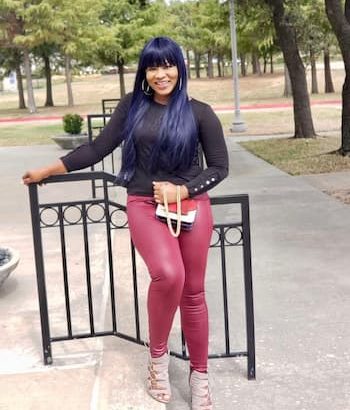 Calista Okoronkwo is a Multiple-Award Winning Nigerian Filmmaker, Actor, Model, and Economist. She is the CEO of Ushers Afrique, an ushering company. Her company provides Ushers for events in Abuja, Lagos, and Imo.

Calista Okoronkwo is such a gorgeous, very creative, gifted, and highly talented in acting and she is also good at interpreting movie roles. She is one of those actresses who can accept any character or role which is being assigned to her by movie producers and directors in the movie industry.

She was born on the 3rd of December but the year she was born is not available. Calista is in her 30s but we will update the information about her actual age.

The talented Nollywood actress, Calista maintains a low profile about her personal life. There is no known information about her exact height, weight nor her other body measurements.

The beautiful actress has black hair and dark brown eyes which tops her beautiful figure as well as her brown complexion. This information will be updated as soon as it has been made available.

She is not married but she is in a relationship but she has not revealed any information about him. Okoronkwo once said No to a marriage proposal to someone who wants her to be a second wife she felt the marriage Is not going to have a happy ending.

She had her primary and secondary school in Owerri, Imo State, and proceeded to badge a degree in Economics from the University of Nigeria (UNN), Nsukka.

Calista Okoronkwo started acting in the movie industry in the year 2010 and her first movie was College Girls which brought her to the limelight. The movie sprung her into fame and attracted lots of film investors. Calista Okoronkwo also features in the popular TV series called Clinic Matters, where she played the role of Nurse Titi and she acted it really well.


The role is one of her most challenging role in the industry has been posing as a nurse that she is not. She looks up to actors in the industry like Joke Silva, Onyeka Onwenu and appreciates their skills and actions. One of her movies brought back some couples who were far apart together, it was really supernatural. She has been enjoying the euphoria that comes with traveling to different places for movies.

A Multiple-Award Winning Nigerian Filmmaker, Actor, Model, and Economist. She has an estimated net worth of $1 million.