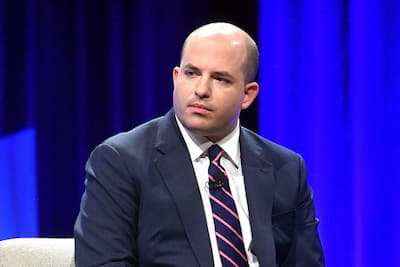 The American Journalist, Brian Stelter (born Brian Patrick Stelter) currently serves as the chief media correspondent for CNN. He is the host of the station’s program, Reliable Sources, and is the former media reporter for The New York Times and the editor of TVNewser.

Stelter was born on September 3, 1985, in Damascus, Maryland, United States. He is 35 years old as of 2020. Stelter holds an American nationality and is of white ethnicity.

Stelter has a tall height of 6 feet 0 inches and weighs 171 lbs. He has brown hair and hazel eyes.

Stelter is a proud graduate of Damascus High School then later joined Towson University where he served as editor-in-chief of The Towerlight from 2005 to 2007. While still at the university, he created TVNewser, a blog about television and cable news which he later sold to Mediabistro and became a part of the Adweek blog network.

Stelter currently shares a blissful marital relationship with his longtime girlfriend, Jamie Shupak a traffic anchor for NY1. The couple married On February 22, 2014, in a Jewish ceremony, and together, they are proud to be called parents of their 2 children (names not disclosed), daughter (b. May 21, 2017) and son (b. August 2019. He lives in the Lincoln Square neighborhood on the Upper West Side of Manhattan, together with his wife and kids.

In 2011, Stelter shared a romantic relationship with anchor Nicole Lapin. According to him, Stelter had to inform his editor of the relationship, and he agreed not to cover CNBC while they were dating.

Following his graduation in May 2007, Stelter joined The New York Times as a media reporter in July of that year. Stelter became the new host of CNN’s Reliable Sources and also chief media correspondent in November 2013.

Brian Stelter Salary and Net Worth