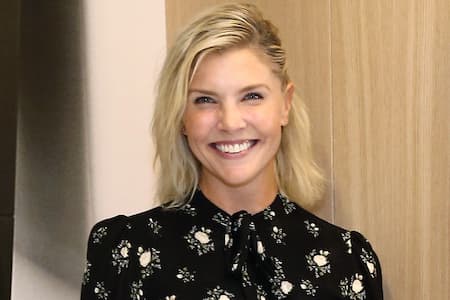 Amanda Kloots is an American television personality, dancer, and fitness instructor. Since 2021, she has been a co-host of the daytime talk show The Talk. She was married to Tony award-winning actor named ‘Nick Cordero’.

Almost after two months of struggling, due to complications of COVID 19, Nick took his last died on 5th July 2020.

Amanda was born in Canton, Ohio, United States. Kloots is the second youngest of five children. She is the daughter of Maureen Kloots. She has not disclosed her father’s identity. Amanda has a sister named Anna Kloots and a brother named Todd Kloots.

Kloots was married to actor David Larsen for six years. She was later married to actor Nick Cordero from 2017 until his death in 2020, the two met while working on Bullets Over Broadway. She received attention for documenting Cordero’s struggle and eventual death from COVID-19-related complications on Instagram. The couple had a son named Elvis Eduardo Cordero born in 2019. She lives in Los Angeles.

Kloots performed as part of the ensemble in several musicals on Broadway, including Good Vibrations, Follies, Young Frankenstein, and Bullets Over Broadway. She is a former member of the dance company the Rockettes.

In 2020, Kloots launched a digital fitness brand, which includes exercise videos taught by her. That same year, she served as a guest co-host on the CBS daytime talk show The Talk. Kloots joined The Talk as a permanent co-host in January 2021.

She released a memoir, co-authored with her sister, titled Live Your Life, in June 2021. In September 2021, Kloots was announced as one of the celebrities competing on season 30 of the competition series Dancing with the Stars.

Amanda Kloots Net Worth and Salary

Amanda has an estimated net worth of  $2million. She has earned her fortune from her career as an actress and a Fitness Trainer. She has not shared any information about her salary.