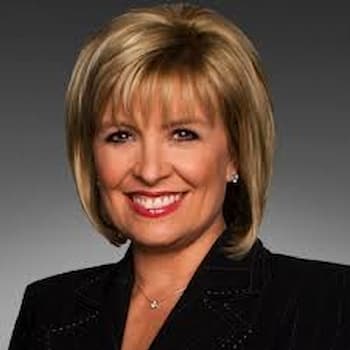 A native of Dover Allison Rosati born (Allison Kay Rosati) is the newscast co-anchor for WMAQ-TV in Chicago. She is co-anchor 5 p.m., 6 p.m., and 10 p.m. She was hosting shows like The Magical World of Disney, ER, and Mom Tv.

Allison was born on 12 February 1963 in Dover, Delaware, United States. She is 58 years old as of 2021. She celebrates her birthday every 12 of February every year.

She stands at a height of 5 feet 7 inches. She has blonde hair and dark brown eyes. The information about her other body measurements and weight is not available.

She was born to a Finnish father and an Italian mother in Dover, Delaware. Allison has not disclosed any information about her parents or her having other siblings. She has kept her personal information away from the media.

Alison is married to Lee Dennis, who is a radiologist. The two got married on March 20 1993 at the Holy Name Cathedral. The couple was blessed to have four children Nicholas, Stephen, Katherine, Kristen, and Allison Dennis. The two separated on January 17, 2017, and there is no information of Allison being in another relationship.

The American-born journalist, Rosati, began her career in Rochester, Minnesota in 1985. She worked as a general assignment reporter at KTTC-TV in less than a year later, she was promoted to producer and co-anchor of the 6 pm and 10 pm newscasts. Allison later went to WGRZ-TV in Buffalo, New York where she anchored the 6 pm and 11 pm newscasts and also did general assignment reporting. Rosati was the local co-host of The Jerry Lewis MDA Labor Day Telethon in 1989 alongside Barry Lillis.

The newscast Allison has earned a lot from her career as a  journalist. Rosati has an estimated net worth of $20 million.