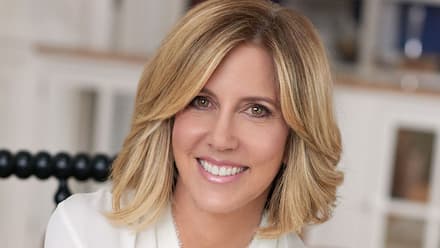 She is an outspoken proponent of First Amendment rights. Before joining CNN, Alisyn worked for many years at Fox News, most notably as part of the Fox & Friends franchise and as co-host of Fox & Friends Weekend.

Alisyn stands at a height of 5 feet 3 inches. She weighs 57 kilograms. She has blonde hair and brown eyes. Her body measurements are 34-25-36 inches.

Camerota grew up with her only brother who is an abdominal surgeon. Not much is known about her mother and father. The information about her parents will soon be updated.

Camerota is a married woman. She has been married to her husband Tim Lewis since 2002. The couple is blessed to have fraternal twin daughters born in 2005. They also have a son who was born in 2007.

She went to American University in Washington D.C. She graduated with a B.A. in broadcast journalism and a minor in criminal justice.

Her final broadcast on that program was September 28, 2013. Camerota started her own blog on the Fox & Friends page on Fox News Channel’s website called, In The Greenroom in October 2007. Fox & Friends began an Internet-only segment called, The After the Show Show in November 2007.

Before her maternity leave, she was a co-host of the weekend edition of the same program, in addition to regularly appearing on the Friday edition of Fox & Friends 1st. She has also been a guest panelist on Fox News late-night satire show Red Eye w/Greg Gutfeld.

Camerota earns an annual salary of between $67K to $95K.

Camerota had an estimated net worth of around $7 million.