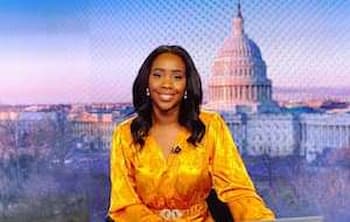 Abby Phillip is a renowned American journalist who works as a political correspondent and weekend anchor for CNN.

Moreover, Abby has appeared as a guest on Washington Week and C-SPAN.

Abby is of moderate weight and stands at an average height. She however appears to be quite tall in stature in her posts relative to her surroundings. She has an estimated height of 5 feet 7 inches.

Abby was born to parents June Phillip, now a  realtor, and Carlos Phillip, a teacher and later an educational psychologist. Moreover, she has five siblings. However, she has not shared much about her siblings and for this, not much is known concerning her siblings. We are keeping tabs and will update this information as soon as it is publicly available. Phillip is happily married to her loving and caring husband Marcus Richardson. The two tied knots in May 2018 at the Larz Anderson House. The two announced they were expecting their first child in 2021.

Phillip attended Bowie High School. In 2010, Abby graduated from Havard University with a Bachelor of Arts in government, after originally intending to study premed. At Havard, she wrote for The Havard Crimson.

Abby joined CNN iN 2017 and covered the Trump Administration. Prior to joining CNN, she worked at The Washington Post where her roles included national political reporting and general assignments.

Moreover, Abby worked at ABC News, where she was an ABC News Fellow and digital reporter in New York City.  She began her journalism career as a White House reporter and blogger for Politico covering campaign Week with Robert Costa on PBS.

Abby co-moderated the seventh Democratic debate of 2020 Democratic Party presidential primaries at Drake University on January 14, 2020. She was criticized for the unfair treatment of Bernie Sanders in moderating the debate.

In 2020, Phillip landed a deal with Flatiron Books for The Dream Deferred, a book she is writing about Reverend Jesse Jackson’s run to become the 1988 Democratic presidential nominee. 2022 will be the release date, and this will be the first major contemporary book on the life and political legacy of Jackson.

On January 11, 2021, Abby was announced to be the new anchor on Inside Politics, replacing John King on the Saturday morning version of the political talk show (John King continues to host on weekdays), starting, January 24, 2021. The show’s name is Inside Politics Sunday.

Abby Phillip Net Worth and Salary